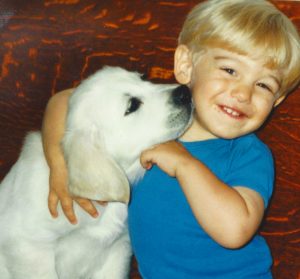 The other day I was walking my dog when I ran into Dr. Jeffrey Friedman. In 1994, his Rockefeller University team discovered leptin, the hormone that controls appetite. People with low leptin are voraciously hungry—and obese.

Friedman offered a treat to Ellie, my 11-pound Havanese dog, but she turned up her snout. I mentioned that Charlie, my late Golden Retriever was so food-obsessed we had to hold him back from scrambling under parked cars to nab chucked leftovers. Could it be hormones? I thought my question was rather facetious because I was talking to a dog-owning hunger-hormone expert.

Turns out, he said, some dogs are prone to the same hormone defect as humans. He referred me to a University of Cambridge study. I got home, fed my dog (she only likes one kind of dog food), found the dog-hormone scientific article and emailed the leading investigator, Dr. Eleanor Raffan.  A few days later, we SKYPEd.

Raffan told me the leptin defect was more common among Labradors and flat-coated retrievers compared to other breeds—no surprise to Lab owners. Here’s what may come as surprise: Among the Labradors, the mutation was much higher among guide dogs compared to the rest of them — 50 percent versus 25 percent. Raffan has a hunch that food-obsessed puppies might be easier to train, giving them a leg-up into the guide-dog program.

Oddly enough her studies did not find the mutation in golden retrievers. I have to believe that Charlie, my late golden, must have some other yet-discovered hormone defect; that his biological drive for food is somewhere on that spectrum between the picky-eating Havanese and the food-focused Labradors. To be sure, Raffan’s research provides insights into why some dogs may be hungrier than others, but in larger sense it’s providing more clues to the physiology of hunger—and may lead to new ways to staunch the obesity epidemic in dogs and humans. (Apparently dogs are getting fatter, too) Already there are a few experimental drugs that seem to be helping the rare people with leptin problems.

However, if you do not have the defect, the leptin shots and any touted leptin diets won’t do anything. That’s because for most of us, eating too much is not just about one mutation, but probably lots of hormones that control hunger, satiety, stress—not to mention all kinds of emotions that go into appetite. Sometimes we eat when we’re not hungry. Still, Studies like this one (that highlight the power of our hormones ) will likely lead to new ways to help those with the rare hormone defect, and certainly shed light on the basic biology of appetite. As Dr. Friedman told me,  “I don’t think on the whole that humans have come to grips entirely with how powerful our basic drives are, how difficult it is to use conscious means to control them.”

And yet.. and yet. When my kids were as young as my son was is in this photo, we spent a lot of time baking cupcakes and brownies. The stirring had a soothing effect on the kids. I gained weight. Friends (perhaps unaware of our daily cooking habit) kindly said it was just my hormones. (of pregnancy? of motherhood?) Nope, it was Duncan Hines Ready-to-Spread Icing. To be sure, understanding hormones will glean insight into our human urges, but sometimes the solution is not rewiring our brains, but rewriting the grocery list.

Check out this commentary by Harvard scientists that puts  leptin findings in perspective.