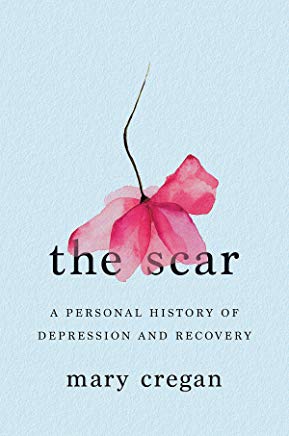 This happened to me twice when I was reading The Scar, Mary Cregan’s engrossing memoir.

A friend came by to say “hi” and, each time, I nearly jumped out of my seat. I was, both times, in a bustling café and so absorbed in the writing that I forgot where I was until the sound of my name jolted me back to reality and my drink nearly went flying.

A writer-friend calls that kind of immersion a “fictional dream.” It’s when the words chauffeur you into the author’s imaginary world.

The Scar is non-fiction but it pulls you in all the same. Cregan writes about her spiral into suicidal depression that began after her daughter’s death.

Anna was born on a Sunday morning in 1983. The Apgar score (a quick assessment of a newborn’s overall health) was low. Anna’s body temperature didn’t return to normal after her first bath. When the nurse held her, the frail infant legs dangled limply.

A doctor came by and Cregan recalled that he said “he feared a heart problem, and in his cautious manner of speaking made it clear that whatever was wrong was very, very bad. He delivered the news and left the room as quickly as he could, but grief broke from us in strange animal sounds before he could close the door. Everything went sliding sideways in that moment, as if reality were breaking up, splitting into dangerous, unrecognizable shards.”

Anna had a fatal heart defect. She died within days of her birth. The Scar takes us along on Cregan’s journey during the aftermath of the baby’s death: Cregan’s hospitalization, attempted suicide; and her treatments that included electroshock therapy, drugs and talk therapy. She even reveals bits written about her from the doctor’s medical records.

Despite the horrific circumstances, there’s little self-pity. It’s as if she’s staring at her younger self, like a medical detective, trying to make sense of it all. Why couldn’t she grieve and move on? Was it brain chemistry gone awry? Some kind of vulnerable genes inherited from her family?

Cregan’s focus is tight and vivid as she describes her own crises, her hospitalizations and path to recovery. But amidst her personal story, she opens the aperture to discuss the science and history of each therapy; the broader implications of treatments.

The earliest seeds for electroshock therapy, for instance, date back to the 18th century. Dr. John Birch, a surgeon in St. Thomas’s Hospital worked in the so-called medical electricity department. In 1792, he applied electricity to the heads of two inpatients suffering from melancholia. One man, he reported, became “cheerful;” the other “refreshed.”

Benjamin Franklin toyed with electricity as a way to help those with severe melancholia but he wasn’t as convinced with its potential.

Cregan contemplates the reasons electricity is considered horrific in psychiatry but accepted in other fields of medicine. (She devotes a chapter to One Flew Over the Cuckoo’s Nest and the decline in ECT shortly thereafter.)

“It is curious,” she writes, “that ECT provokes such horror while television shows like ER and Grey’s Anatomy routinely feature the dramatic effect of electricity when applied to a heart in cardiac arrest.”

The Scar is a heart wrenching, smart read that sheds a light on a dark subject.

Cregan, who has a PhD in English from Columbia University and currently teaches at Barnard, sprinkles the book with literary references and lines of poetry. It offers the reader a chance to perceive mental illness from another prism.

Those who have experienced the kind of emotional trauma that Cregan describes—some 15 million Americans have had at least one bout with major depression—will find company in her memoir, solace in her words. The rest of us can learn not only about her story but how many psychiatric drugs and treatments came to be.

“The story of my scar isn’t heroic, but no less than the hero Odysseus,” Cregan writes, “I am a survivor. In the much older body of the desperate young women who tried to end her life with a piece of broken glass, I am still here.”