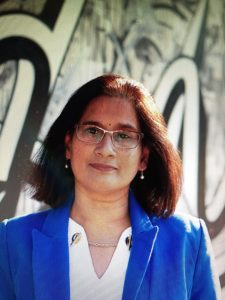 What does it mean to recover fully?

Does it mean the scars aren’t visible? Does it mean you’ve been able to move on with your life? Perhaps a new job or new partner?

Usha Reddi, 54, considered herself recovered after a traumatic childhood. For six years, from the age of 10 to 16, she was sexually abused by her father. She confronted him nearly 40 years after the assaults.

Reddi believed her outward achievements demonstrated her inner strength. She had a successful career as a public school teacher,  served twice as the mayor of Manhattan, Kansas and is currently the City Commissioner and Mayor Pro Tem.  Reddi married, divorced, re-married and is close with her three children and one step-child. As further proof to herself that she was “okay,” she never suffered from addictions to alcohol or drugs.

But the façade of a woman holding it all together started to crack when her children began questioning secrets that they suspected brewed within the extended family—they never saw their grandfather and knew little about him. They also wondered about the impetus behind their mother’s extreme over-protection.

Reddi went public with her story on her local radio station, KMAN, before launching her campaign to run as a Democratic candidate for U.S. Senator from Kansas. And yet, what her story reveals is much more than political savvy, but a woman coming to terms with buried psychological trauma and how digging into her own psyche, however painful, has helped her heal decades later.

“One of the things I’ve done throughout my life is move on and kind of built my own character as I’ve moved on,” she told me. But it was impacting herself in ways she did not want to face and it was affecting her children, too.

Reddi finally decided to tell her daughter and two sons the truth when they were teenagers. Her middle son convinced her to confront her father.

It was a long and painful journey that began with her telling her own children and they convinced her that she needed to bring justice.

“It was a very vulnerable time,” Reddi said.

Her middle son confronted his grandfather and got a taped confession. Reddi was going to report the sexual abuse to the authorities in Ohio, but was stymied because they have a statute of limitations. For a decade nothing happened but her son persisted. He was infuriated that they lived with injustice. Eventually, Reddi learned that she could report  the sexual assault to authorities in Virginia, where there is no statute of limitations and where she lived from the ages of 10 to 12. Her father was extradited from Texas and convicted this summer.

A beloved town doctor, his medical license was revoked and he was sentenced to 10 years in prison with nine years suspended for raping her repeatedly in the 1970s

Like so many children, as a young woman Reddi was terrified that if she sought help, she’d be put in foster care and her father would go to jail. She worried no one would believe her and no one would want to help her.

From her experience as an elementary school teacher, Usha knows that children would rather remain in a family “where it’s horrible than to go the unknown.”

In addition to suffering the physical and emotional consequences of sexual violence, children suffer from the trauma of growing up in a world where the guilty are not punished and the victims feel blamed. Reddi said that what has bothered her the most is that her father was perceived as the victim. “People were saying, ‘don’t do this to him,” said Reddi. “I’m not doing anything to him.”

This whirlwind of emotions brewing deep inside not only destroy trust and hinder social relationships, but recent evidence shows that severe emotional trauma can have long lasting physical damage, including perhaps increased risk of asthma, diabetes and heart disease.

Reddi said she wants to be part of the growing group of survivors who are helping to get the word out to victims of incest or abuse that they need to feel closure, to realize they are the victims, and by doing so will recover power they may have lost. RAINN, the nation’s largest anti-sexual violence organization, provides a list of resources including hotlines, live chats, and therapists.

“This is part of who I am,” she said, “but it’s not everything I am. It’s given me a platform to help other people on this journey. Regardless of what direction they want to go in, they are not alone.”

In the August issue of the Journal of Child Sexual Abuse, Agnes Wohl, a clinical social worker and Gregory Kirschen, PhD, a psychotherapist, discuss the impact of using bibliotherapy (turning to fictional age-appropriate stories) along with traditional psychotherapy to help children discuss, grapple, and learn to cope.

Experts say that if a child reveals that he or she has been abused, it’s important to take their stories seriously.

For Reddi, the issue was learning to heal not just from the outside (getting a job, learning to trust loved ones) but also healing within.